You are here:
Investment Reports 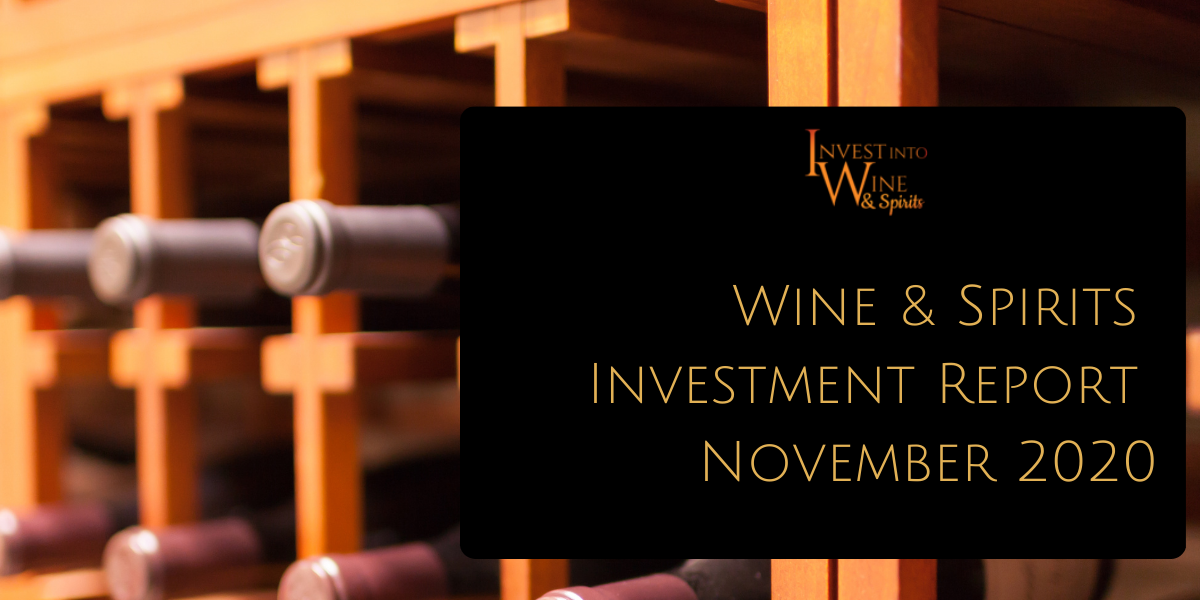 This investment report is sent in 3 parts. Access full copies of the reports HERE (If you don’t want to wait)

If you missed the email, here is a reminder that our website has now changed to SureHoldings.com
Save this in your browser to logon to your portfolio:
https://sureholdings.com/customer/account/login/
Email us at support@SureHoldings.com

Another Increase for the Wine Market in November !

Fine wine prices yield yet again positive results, with another fantastic month of growth.  This growth presents the makings of a rally in the fine wine and spirits market.
Wines like Lafite Rothschild 2018 increased 14% and Leoville Barton 2000 increased 9% in just one month.
Lafite Rothschild 2018 was a recommendation we made in May this year to our private clients.  If you are not on our list for a recommendation call, please add yourself to the list:
Click Here to be added to the list
There was a staggering 49.6% of wines that increased in value versus only 14.5% that decreased in value.
The total overall return for the Invest Into Wine Index was 1.001%. Nearly all the first growth Bordeaux wines like Latour, Haut Brion, Lafite Rothschild, Margaux and  Mouton Rothschild showed an increase.

Whisky recommendations sell out within 2 hours….

Our last 2 recommendations in Whisky were gone within 2 hours of release.  There is an overwhelming interest and enthusiasm for fine and rare whisky investing.
Stay tuned and reply fast if you are interested in the next parcel.

People will continue to drink wine regardless of whether there is a bullish economy or a weak economy.  It’s only the reason for drinking that changes.
The wine market did not perform well in 2019, the market had  strong growth in 2016 and came off a peak in 2019.
In addition, the delays of Brexit in 2019 created some of the slower growth because the UK has been a wine hub for the best wines in the world for centuries.
It was also a point that the stock market was in a very bullish phase.  In the first half of 2020, online wine sales rocketed as people were ordering wine during the lockdown with nothing else to do. But  stocks of new wines bought by the F&B industry were affected due to closure of the lockdown.
One seemed to cancel out the other…. And the wine market remained constant.
As the wine market entered the fourth quarter of 2020, there has been solid growth again and what looks to be the commencement of a rally. As Asian countries open back after lockdown, especially China which has virtually no cases of Covid and is running at full steam.  China is a big player in the world’s wine market. Being the world’s 4th largest importer of wine.
With less than $5,000 you can start or add to your existing wine portfolio. Check out our investment packages for HERE.

If you are selling wine, buyers are looking for bargains. Be 2% or more lower than the bid price to entice a buyer, we are not in a full blown rally just yet.

What wines would be best to buy right now?

These wines are in demand and have a good track record of doing better, first when a rally starts.

Look out for an email that is sent every Monday and Thursday from WineTrade@SureHoldings.com

The major indices table below, compares the Invest Into Wine Index with the London Vintners Exchange Index and some of the world’s stock markets.

Invest in a case of wine today!
Check Your Wine Portfolio

Selling prices are set back at the market value. Your portfolio advisor will guide you on the correct price to sell your wine if you need assistance, email support@sureholdings.com to check the market price before selling.
The figures for October
This month’s valuations showed the Bordeaux market has increased by 1.141% for the month. Champagne and Rhone Valley wines have decreased -0.460%.
–   49.6% of the wines valued showed a positive return, while 14.5% showed a negative return and 35.9% remained the same.

–   80.9% of our portfolio is Bordeaux while 15.3% is Champagne and Rhone Valley and our new addition of Whisky investments make up 3.8%

Scroll down for the winners and losers for October versus November.

Wine Investors Masterclass: Get Access while it is still Free!

The USA has a new President, how will it affect markets?

Biden’s election policies according to joebiden.com are listed with the highest priority on fighting the pandemic, with statements of listen to the science and make public decisions based on health professionals. It’s likely that pharmaceutical and the medical industries will benefit greatly.  Biden has already nominated a coronavirus task force in his transition team.

Of the list of goals, providing immediate relief to working families, small businesses and communities is next on the list. Included in this vision is a plan to bring back American manufacturing.
Followed by giving every american affordable healthcare, a plan that is likely to be a follow on from the Obama Presidency.
While these plans are very philanthropic in nature, they do not bode well for the corporations. Since there is little mention of maintaining lower tax rates as per the Trump presidency.
Unless they have Biden in their pocket from his years in politics. In which case, the plans could become smoke and mirrors.
It is hard to see a bullish stock market with the plans laid out by the new incoming President.
Meanwhile, while still in the White House Trump is requesting a recount and the Attorney General has announced there will be an investigation into voter fraud by the DOJ

The U.S Stock market rallied on Monday 9th November 2020 and the Dow Jones almost reached 30,000 for a brief moment in trading, reaching a high of 29,896 points.

The drive was based on good news of a potential vaccine from one of the world’s largest pharmaceutical companies Pfizer.
If more good news on the vaccine comes out soon, it could push the Dow over the 30,000 level.  The 30,000 mark is a very strong and key level for the DOW Jones.

This short term rally could push the markets into a correction or the market could power through and hit another record high.  At the current levels, both Nasdaq and the Dow are at all time highs. When a market is hitting all time highs without any real reason, it is safer to assume that markets will fall as opposed to rally.  After all, where is the new money coming from?

However, this is a very strong level for the Dow Jones, and it could go either way. The Nasdaq went down on Monday, as tech stocks like Amazon that have profited hugely from the Pandemic had some major sell offs.  Amazon dropped 5% on Monday’s trade which equates to around 22 billion dollars in just one trading session.
Hotels, restaurant chains, airlines and travel companies did very well, an indicator that the market assumes the travel and F&B industries will bounce back quickly upon the release of an approved vaccine.
One example is Sotherly Hotels which operates under the Hilton, CrownePlaza, DoubleTree, and Sheraton brands. It showed an increase of 64% in one session.  Yet Sotherly Hotels trading at $2.58/share is tiny in comparison to Amazon’s $3144 dollar share price. Pfizer announced a vaccine that is 90% effective in 1st analysis

Pfizer could apply for an urgent FDA approval but it is still too early to expect a vaccine within the next two months.

So far 94 participants have gotten sick with Covid-19. Out of 22,000 participants who were given the Covid-19 vaccine.
In total 44,000 patients were on the trial, but only half were given the vaccine, while half were given a placebo of salt water.
With a 90% effective result so far from this trial, in contrast two doses of the measles vaccine are 97 percent effective.
Category: Investment ReportsBy Kimmy Goh11th November 2020Leave a comment
Tags: alternative investmentBest Fine Wine for 2020fine wineFine Wine InvesmentFine Wine Investmenthedge against risky investmentInvest into WineInvestment Adviceinvestment during recessioninvestment fundInvestment Reportinvestment strategyinvestment tipsstable investmentSure Holdingswine investment 2020wine investment report
Share this post
Share with FacebookShare with TwitterShare with Google+Share with PinterestShare with LinkedInShare with WhatsApp